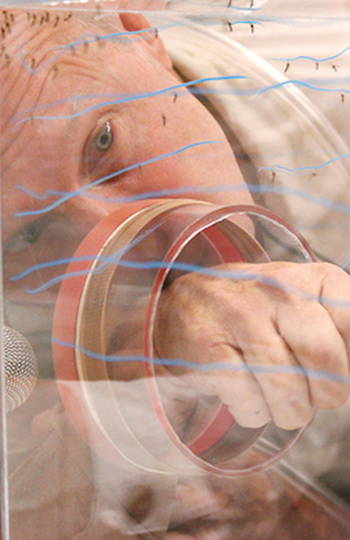 Robert “Bob” Hancock, Ph.D., is a professor in the Department of Biology at Metropolitan State University of Denver.

Hancock has studied, taught and filmed insects all over the world for more than 20 years.  The filmmaker and medical entomologist’s close-up footage has been featured on network and cable television programs world-wide and his documentary series “Mosquito Man” has been recognized internationally. His film, “Bedbugs of London” received an Honorable Mention for macro cinematography from the International Wildlife Film Festival. Hancock was interviewed about the new human clinical trials for a possible West Nile virus vaccine in 2015.

He was a professor of biology for 15 years at University of the Cumberlands in Williamsburg, KY before joining MSU Denver in 2008. In addition to teaching, Hancock serves as an undergraduate advisor in the areas of entomology, animal behavior and zoology. He has also written many scholarly articles on the behavior and physiology of mosquitoes, bed bugs and other blood sucking insects.

Hancock received his doctorate and masters in medical entomology from Ohio State University and two bachelor’s degrees in biology and chemistry from Hastings College in Nebraska.